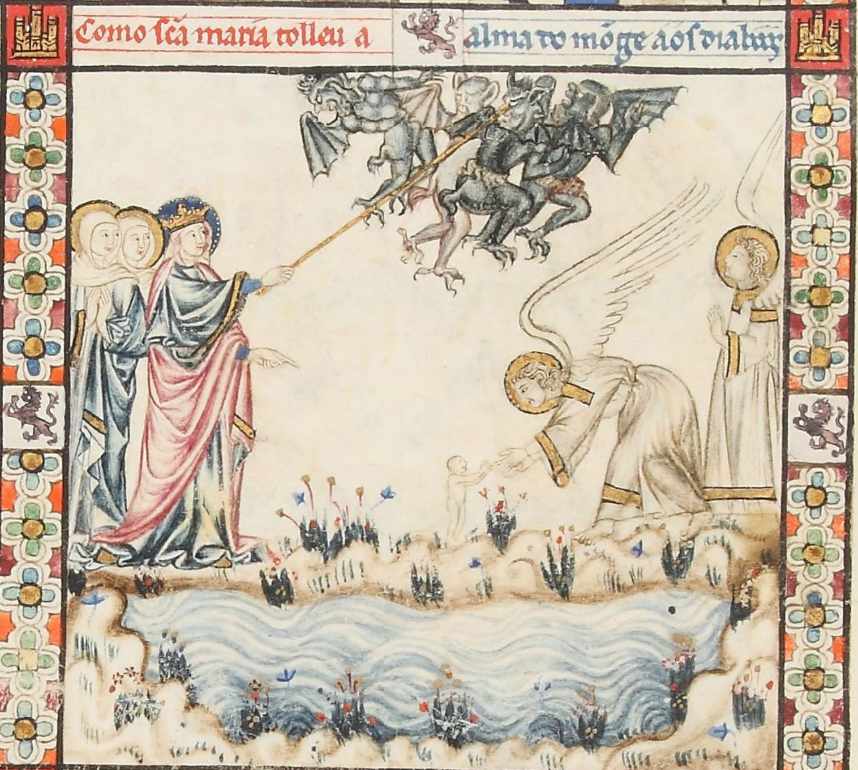 This course is designed for
This masterclass is primarily designed for singers of medieval music, however, instrumental participation is more than welcomed as well. We will conclude our time together with an informal concert.

Please advise us of any mobility or other specific requirements.

* For all options above: optional buy-in to online lessons & coachings, held in the 3 hours after each online course, €60/hour

“… And he who is rightful king and lord of the Romans composed this book, as I found, for the honor and praise of the Holy Virgin Mary, who is Mother of God, in whom he greatly trusts. Therefore, from Her miracles he composed songs and melodies which are delightful to sing, each with its own narration, as you can find herein…”

The first four online sessions are designed as a general introduction into the world of medieval music and its performance, and the last four are built around the traditions involving the veneration of the Virgin Mary. Designed as a mixture between practice and lecturing, this course will guide you through the broad landscape of the many various musical repertoires of the High Middle Ages, ultimately ending in a focus on the much-beloved repertoire of the Cantigas de Santa Maria.

Pulling together all of the skills from the online sessions, the in-person weekend masterclass, held in Limerick between 18–20th of November 2022, will provide participants with a chance to deepen the practical application of the topics addressed in the online course.

In this three-day masterclass we will:

This masterclass is primarily designed for singers of medieval music, however, instrumental participation is more than welcomed as well. We will conclude our time together with an informal concert.

Medieval music is a vastly rich and complex subject which encompases many traditions and styles over a period of almost 700 years! In this session we will look at the basic concepts of medieval music performance, create a timeline of repertoires and begin establishing a general topography of medieval song composed between the 9th and 13th centuries.

In this session we learn about the way medieval music is organized on the melodic level. The way most of us learned about medieval modes was to imagine them as scales on the white keys of the piano. It might surprise you to learn that this is not at all the way the medievals understood modality. How did they experience it? How can we identify it, and how can we transform this theoretical knowledge for our practical benefit? Bring along your instrument or your voice for some practical experimentation in modal improvisation at the end!

Nowadays we can hardly imagine learning something new without reading about it first. Memorisation is, at best, limited to a few poems we were instructed to learn sometime in secondary school. Our medieval colleagues however, were quite accustomed to the practicing of the art of memorisation on a daily basis. How was it taught? What are the extant medieval or ancient exercises which can still help us train our capacity for memorisation? What is the history of memorisation practices? And what role does musical notation play in the world of orality? Bring along your curiosity for some fun medieval memorisation exercises, and have a go at reading from original medieval notation at the end as well!

Our sense of medieval music would be only half complete if we didn’t pay some attention to the beginnings of polyphony as well… Let’s rethink what it truly means, dust off one of the oldest manuscripts containing polyphonic music and have a listen! As a bonus, we will also examine the art of extemporizing organum according to one 13th century treatise! Bring a pencil, an eraser and some music paper if you like, but most importantly, as always, bring some curiosity and a warmed-up voice!

A SOUNDING AND VISUAL ICON, THE MEDIEVAL SUPERHERO – THE FLOWERING OF MARIAN SONG

In this session we take some time to get to know a little bit better, one of the most beloved figures of Catholic worship – the Virgin Mary. Beginning in the 12th century, Mary’s status began to radically shift from her being a somewhat peripheral figure in the unfolding of Jesus’s life, to occupying the central role as the intercessor par-excellence who always pleaded to Christ for mercy on the behalf of the faithful, who embodied a safe haven for the inconsolable, and functioned as a source of limitless artistic creativity not just for the visual artists but for singers and poets as well. What were the songs that were sung in her honor all across medieval Europe? We will conclude this lesson with a taste of the various Marian-inspired songs so make sure to be ready for some singing – not just in Latin but in some of the vernacular languages of the time as well!

In this session we go more in depth in understanding the basic principles of medieval art of rhetoric. We will learn what it is, how it was inherited from antiquity, who were the main ancient and medieval writers who wrote rhetorical treatises, as well as look at some examples of the wide spectrum of effects that the application of different kinds of rhetoric can have on a musical/poetic creation also in the context of the parallel tradition of storytelling. By singing examples of two very different monophonic repertoires which were both created in the 12th century, we will learn how the tools of rhetoric were used to perfectly support musical and poetic visions which in their sounding reality couldn’t be more different from one another...

PREPARATION FOR THE IN-PERSON MASTERCLASS: CANTIGAS DE SANTA MARIA I : THE STORY BEHIND THE MUSIC

This is a session on the historical and cultural context of the Cantigas de Santa Maria. We will learn about Alfonso X, also known as “El Sabio”, who he was, where he lived, what he did, why he is such an important figure in the world of medieval music performance – not just in the context of the CSM but also in a wider sense. All those who wish to also take part in the in-person masterclass will be invited to choose their CSM piece from the provided repertoire list.

The last in the series of our online sessions is designed to combine all elements we have spoken about thus far and apply them to the study of one particular monophonic repertoire: The Cantigas de Santa Maria. The second half of the lecture is reserved for  individual exploration in the format of a short online master-class. We will look at the pieces which you chose in session seven. The time spent with individual singers working on their song will depend on the overall number of active participants. Please use quality external microphones for this session, if possible. All those who don’t wish to engage in these individual coachings are still kindly invited to stay with us as auditors.

Pulling together all of the skills from the previous sessions, the in-person weekend masterclass provides participants a chance to deepen the practical application of the topics addressed in the online course.
In this three-day masterclass we will:

- Study and perform a selection of the Cantigas de Santa Maria,
- Explore the art of storytelling through song, Clear practical issues regarding the pronunciation of the language of the Cantigas, Galician-Portuguese,
- Contemplate the possibilities of instrumental accompaniment of monophonic song, and to-it related issues such as: tuning to an instrument, and creating a sensible arrangement for performance.

This masterclass is primarily designed for singers of medieval music, however, instrumental participation is more than welcomed as well. We will conclude our time together with an informal concert.

Please advise us of any mobility or other specific requirements.

Made possible with the support of the Grants Under The Arts Award from Limerick City & County Council Arts & Culture Office.

Note all course materials are copyrighted and property of guest teachers and H.I.P.S.T.E.R

Proud to be a part of European Expo 2020

Supporting Early Music in Ireland, Now and Then Media engages the public through H.I.P.S.T.E.R. (Historically Informed Performance Series, Teaching, Education and Research) with concerts, courses, and a wide network of professionals.

Made possible with the generous support of: